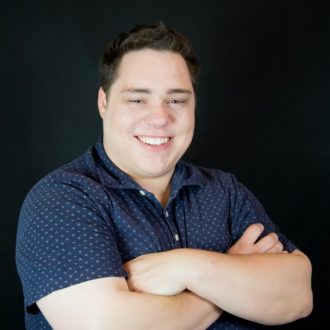 Jordan James, “Jordan Moll-Vigrass” brought excitement to HANCI as soon as he joined us as Assistance Coordinator for the Council for Older Adults in Niagara County (COA) from September of 2021 to March, 2022.

In August of 2022, Jordan returned as Communications Coordinator for Complete Senior Care & HANCI.

Jordan is one of those people trying to make the world a better place – thus his idea to start a television show dedicated to showcasing people in our community who put others first. The “Good Deeds Buffalo” show puts a spotlight on people who devote their lives to others, as they shine like a beacon of hope, of beautiful support, following their destinies asking not what’s in it for them, but what more can they give.

When asked where he came up with the idea for “Good Deeds Buffalo,” Jordan said, “The idea was born of a conversation between my mother and me, shortly before her passing. As people who pride ourselves on being overly kind and doing our part in our community, she wondered why there was not a television show that highlights the good in the world. Even in her passing, her legacy of giving continued, donating her eyes, so another could see, and the rest of her body for burn victims and more.  I will forever believe she and I uncovered critical opportunities to change the world.”

We look forward to seeing all the great things Jordan can accomplish within the organization!